Here's a photograph of a strip I've drawn that appears in issue 226 of Viz Comic which is out later this week, I think. The strip is called 14 Year Old Stand-Up Comedian. 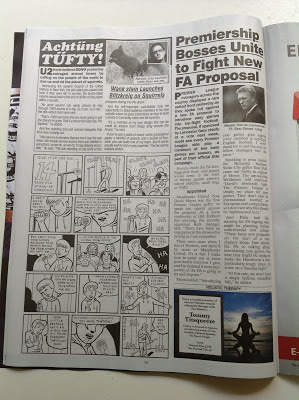 I've been a long time admirer of Viz, ever since I bought issue 13 from a comic shop around 1985. I remember reading it on the train home and having to put it away into my bag because I couldn't stop myself from laughing out loud. My copy of the comic made its way around my friends so that when eventually it was returned to me it was in pieces. Shortly after, I submitted my first unsolicited strip called Greg Heath The Compulsive Thief. It was, of course, rejected but it was rejected with unexpected but appreciated respect. Since then, I've taken to submitting strips to Viz every couple of years, so I'm sure you can imagine how delighted I am to have at last succeeded after two and a half decades of trying.
Posted by Paul B Rainey at 06:00 4 comments:

Richard Bruton has written a review of Thunder Brother: Soap Division issue 5 for the influential Forbidden Planet blog. "Thunder Brother is yet another example of how well Rainey does his brand of soap operatic sci-fi, continually inventive, forever interesting stuff." You can read the full review here and you can order a copy from my shop or by selecting the Paypal button below. 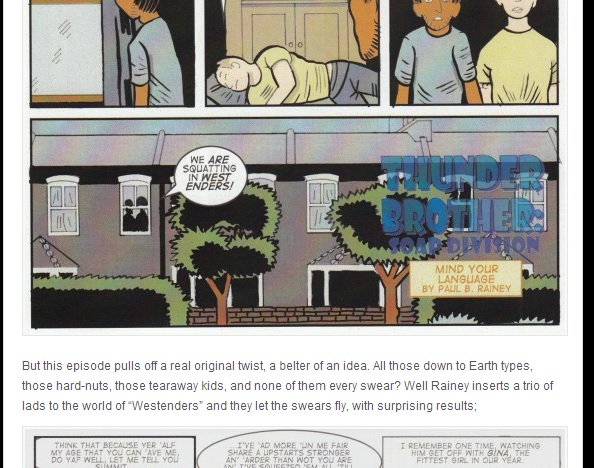 Here's a nice mini-review written by Robert Jackson of the latest issue of Thunder Brother: Soap Division. "This is the start of one of my favourite storylines so far". You can order the latest issue from my shop or by selecting the Paypal button below.

Rich Johnston has written a review of issues one to four of Thunder Brother: Soap Division for the hugely popular website, Bleeding Cool. "...Thunder Brother: Soap Division, a comic that sits somewhere between Anna Mercury and The Invisibles, if it were directed by Mike Leigh. This very mundane look at the incredible may remind you of Paul Grist’s Mud Man, but this is both satirical and cosmic in its scale."

You can order the first four issues from my shop. Also, between Rich reading the comics and posting his thoughts, I have released a fifth issue which you can also order from the shop or by clicking the Paypal button below. (Please visit my shop if you're not based in the UK or contact me for alternative methods of payment).