There I was, yesterday, happily reading this interview with Darryl Cunningham on the Forbidden Planet Blog, thinking to myself, "I'm going to save that picture (low res version below) and use it as my wallpaper for a while", when in response to a question about what comics he's been enjoying recently he responds, "At Caption I picked up copies of Paul Rainey's There’s No Time Like The Present. This is an ongoing series which I can’t believe doesn’t get more attention. It’s wonderfully drawn. It has rich characterisation. It’s funny and has an intriguing plot. It’s domestic and naturalistic in its style, but it also has a surreal science fiction edge. Imagine a well-written comedy-drama, set in modern Britain, where people from the future are inserting themselves into our society by setting up businesses. The BBC should snap this up."
Another cartoonist, Rob Jackson, whose work I also enjoy, wrote about TNTLTP part 8 back in November. "There’s No Time Like the Present Part 8 is another excellent read in this series." As you know, one cartoonist can be wrong but two? It's impossible. So, why not visit The Shop and buy a copy. 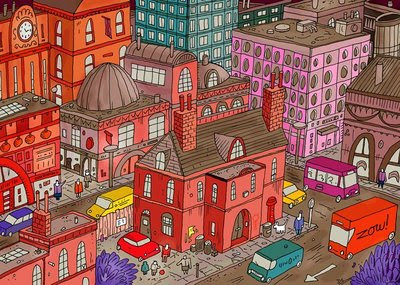 pbrainey
Posted by Paul B Rainey at 11:41 No comments: